An Adult Toy Shop with the Right Vibe

Ever wondered where to go for the occasional sex toy after Guliani shut down the sex shops in Times Square?  Skeeved out by the gross dimly lit places with the creepy guys?  Wonder no more, and no more skeeviness.  I visited Babeland today, at 462 Bergen Street in Park Slope, Brooklyn, located next to a maternity clothing store called Bump and a few doors down from Ricky's.  Originally called Toys in Babeland, they started out in Seattle Washington in 1993.  Now there are 4 stores, 3 in the NYC area, and a huge online store.  Brooklyn, where I went, is one, and there is also one on the Lower East Side, and one in Soho. Babland was the idea of Rachel Venning and Claire Cavanah, two Seattle women who were seeking a comfortable sex toy shopping experience without the dinginess associated with the normal adult store. I'll admit that I actually Researched this a little bit, just to get an idea of the place, and it's "vibe".  Literally.  They have a display of maybe 40 or so vibrators that are out of the package for you to feel the intensity of them. The best sellers are the Gigi the Form 2 and the We Vibe II.  Next to the vibrator display is a display of condoms, and each one has a "display" condom out so you can see what it looks like.  Blown up of course. There are also some videos, and some books as well.  Rachel and Claire have 2 books out, Sex Toys 101 and Moregasm.  Towards the back of the store there are some games, and body lotions and other fun stuff. 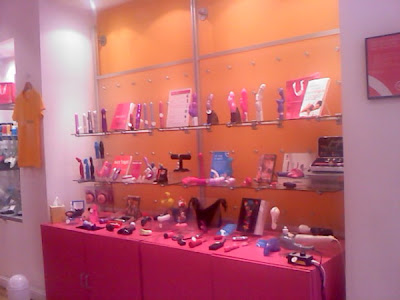 The sex educator that I spoke with was very nice and friendly, and answered all of my questions.  My first question had something to do with the location of this store.  It is in Park Slope, well known for the parents and the strollers that frequent the sidewalks.  I thought there might have been some resistance to a sex store coming in, sort of a "Not in my backyard" type of situation, but I was far from the truth.  There are parent groups, and the store is very parent friendly.  They are also very community friendly, with pamphlets and business cards up front.  When you pass by it, there is nothing amiss in the windows at all. 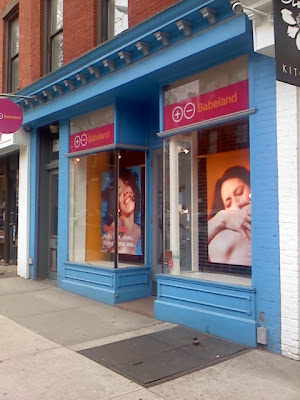 They also have some in-store workshops and events that are generally free, some cost $35, and there is a list of them, and which stores they are at, here.  They also have private shopping available, offered free and before or after regular business hours for 1-4 people.  That is by appointment only.  Babeland also delivers within 3 hours for a $35 charge.  That is available within Manhattan and Brooklyn during business hours.  Rachael Venning currently lives in Oakland, CA where the internet business is based out of, and Claire Cavanah lives here in Brooklyn, and occasionally stops in to visit the stores.

A special thanks to the sex educator I spoke with this morning (sorry I never got your name!) and also to the PR Manager, Pamela Doan.

Email ThisBlogThis!Share to TwitterShare to FacebookShare to Pinterest
Labels: Brooklyn